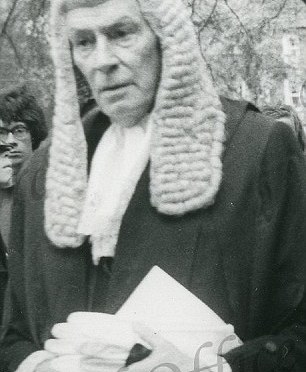 The perpetrator  Revd Garth Moore, a former Chancellor of three dioceses of Southwark, Durham, and Gloucester and vicar of St Mary’s Abchurch in the City of London

The Church of England published only the conclusions and recommendations of the review, without names, but last night The Guardian revealed further details from within the report.

when questioned for the report, none of the senior figures (three bishops and a senior clergyman who was later ordained as a bishop) could recall the conversations.

‘What is surprising about this is that [the victim] would be speaking about a serious and sadistic sexual assault allegedly perpetrated by a senior member of the hierarchy. The fact that these conversations could be forgotten about is hard to accept,’ the report said.

It was while he was a house guest with Chancellor Moore in Gray’s Inn, in central London, where alleged attempted rape took place

Chancellor Garth Moore was a barrister of Gray’s Inn

One difference in the London case is that the survivor has been able to produce a series of witnesses who recalled hearing his story down the years.

On the other hand, other senior figures, including two bishops, have said that they do not recall hearing the survivor’s story. This, the survivor says, has contributed to his conviction that the church hierarchy has long been engaged in a cover-up.

Many senior lawyers are freemasons and there are a number of lodges based on legal practice.  These include the elite Chancery Bar and Gray’s Inn lodges….